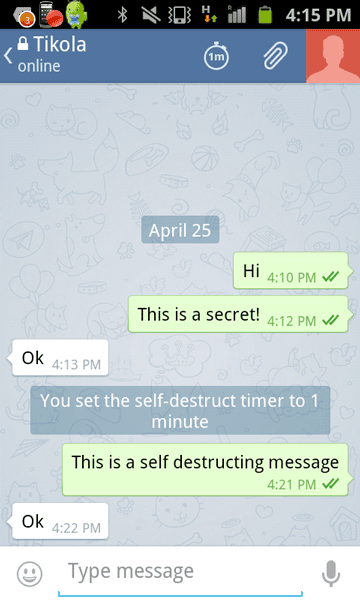 Encrypted messaging app Telegram released a new version (version 4.2) on Sunday, which makes it get the self-destructing messages feature like Snapchat.

According to a blog post of the company in yesterday, This new feature in the Telegram app will allow people to send “self-destructing” photos and videos, which can disappear automatically after a time-out, and how long it keeps on the app is totally depends on the time you set, while the ephemeral pictures and video in Snapchat would automatically disappear in a few seconds. In addition, the new Telegram also allows the user to add a short bio to the profile, which can be displayed in the groups the user has joined, but this feature is not available in the Web platform now.

For the security concern, some governments think that this feature would help terrorists to spread extremist plan and plot attacks, there have been some countries have been banned this application.